← A Homespun Labor Day Carnival
Beware of “The Year of No” →

Because Mrs. Obama Said To, That’s Why.

My youngest son came home from school today and boldly proclaimed, “That’s it!  I am no longer buying lunch at school.” Now, it’s not like he buys lunch that often, but it is nice not to have to smell chicken nuggets cooking first thing in the morning, at least every once in a while, so, this news was a little disappointing to hear.  But to take such a dramatic stance, I figured something big must have gone down.  Was there pushing in line? Had the cookies run out?  Did he drop his tray and cause a scene?  I waited with bated breath to hear…

“What’s gotten you so upset, pumpkin?” I cautiously broached the subject.  “Mrs. Obama!” he cried.  “Huh?  Come again, sweetie?”  I questioned, as this was not the direction I was expecting. “Mrs. Obama, I said,” he repeated looking at me as if I didn’t have a brain in my head. “Well, of course you were talking about the first lady of the United States ruining your lunch, baby doll. Just curious, as to how that came about.” “Well,” he said with a pout, “Mrs. Obama has said that whenever you buy lunch now, you have to take a fruit and a vegetable with it.” “Oh, O.K., now I see. So, what’s wrong with that? It is a good idea. But you know you can take it, try it, and if you don’t like it, you don’t have to eat it.” ” Yes, you do,” he continued to complain. “She said you have to take a fruit and a vegetable AND you HAVE TO eat it.” I do have to say, I found a little comfort in the knowledge that the wife of the President was having just as much trouble as I was, getting my six-year-old son to eat healthy. But it did bring the dilemma of my children’s poor eating habits back into light once again. I try, believe me I do. I cook the vegetables, I buy the produce, but after half-a-dozen, heart-felt rounds of begging, I give up and forget about it for a while – apparently until someone in the oval office or a relation of such a person, makes me face the situation again – and let me tell you, as a mother, I don’t come out looking so good. 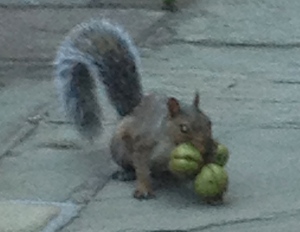 Not only do I have trouble getting them to eat what’s good for them, they also overload on the bad stuff.  I understand we do live in a world of excess now. Everything is super-sized. Even the squirrels in my yard have gone crazy with that. I took this picture of a certain squirrel, on my patio, carrying not one but three nuts in his mouth at one time – there are a plethora of jokes I could insert here but I’m sure you’ll appreciate my refraining from doing so. With my kids, they start off with asking for one cookie, but then they come back and ask for two more. But it doesn’t stop there, they follow you, from room to room, “just one more, just one more, just one more”. Eventually, I hate to say it, but you give in – just to get the voices to stop. I call it temporary insanity and it just might be. I know it’s not right. I’m in charge here – that’s the mantra that I chant to myself in the mirror every day. And as soon as I start believing that, we might actually get this problem solved.

We all remember, when we were younger, you ate what was given to you, brussel sprouts and all, and you weren’t allowed to get up until you were finished. If I had to go through that, why don’t my kids feel the same obligation? But I guess the answer to that question is a blog in itself.  So, I am still faced with the fact that the closest my kids get to eating vegetables is a potato, and as far as my household is concerned chicken nuggets could be designated as their own food group.  So, maybe, instead of once again allowing my children to make their own rules, I should instead use this opportunity that Mrs. Obama has so graciously given to us. Maybe the tact I should be taking is, when the First Lady of the United States of America tells you do something, you better do it.  She is married to the Commander and Chief of the Armed Forces, after all, so if she says you need to take a fruit and a vegetable AND you HAVE TO eat it, maybe, son, you better think twice about not doing it.

To see how to navigate this blog, click on “What Is Mommysoffice?” in the TOP HEADER MENU.

Posted on September 20, 2012, in MARKETING - The Random Ramblings of a Housewife and tagged cafeteria, child, eating, mom, Mrs. Obama, parenting. Bookmark the permalink. Leave a comment.

← A Homespun Labor Day Carnival
Beware of “The Year of No” →